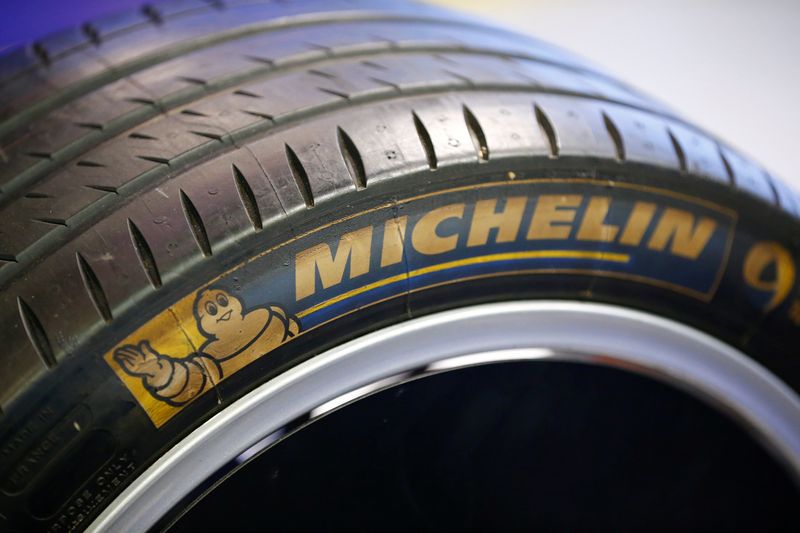 © Reuters. FILE PHOTO: The logo of French tyre maker Michelin is seen on tyre of a Formula E racing car on display at the innovative center of German postal and logistics group Deutsche Post DHL in Troisdorf near Bonn, western Germany March 9, 2016. REUTERS/Wolfg


(Reuters) -Michelin plans to hand over its Russian activities to a new entity under local management by the end of the year, it said on Tuesday, becoming the first western tyre maker to give up doing business in Russia.

The French company, whose western rivals in Russia include Italy’s Pirelli and Germany’s Continental AG (OTC:CTTAY), said it had become impossible to resume output owing to supply chain problems under the sanctions against Moscow.

Foreign companies seeking to exit Russia over the war in Ukraine also face the prospect of a new law being passed in the coming weeks to allow Moscow to seize assets and impose criminal penalties.

That has encouraged some businesses to accelerate their departure.

The first Western tyre maker to enter Russia in 2004, Michelin (EPA:MICP) suspended its manufacturing activities there in mid-March because of supply chain difficulties after the invasion of Ukraine and resulting sanctions against Moscow.

“It is technically impossible to resume production, due in particular to supply issues, amid a context of general uncertainty,” said Michelin, which makes tyres for cars, aircraft and trucks.

Until Russia invaded Ukraine, nearly 30% of Michelin’s carbon black – used to strengthen rubber in tyres – was sourced from Eastern Europe.

Michelin’s sales in Russia represent 2% of group sales and 1% of its global car tyre output, the company has said in briefings.

The company said it had a balance sheet exposure of 250 million euros ($265 million) from Russian operations, adding that the transfer would not impact its financial guidance.

German car parts supplier Continental in April said it had temporarily resumed tyre production for passenger cars at its Russian plant in Kaluga to protect local workers who could otherwise face criminal charges.

Finland’s Nokian Tyres had warned that month that EU sanctions will make it hard to sell tyres in Russia.

Italy’s Pirelli has halted investment in Russia and has progressively limited activities at its plants there. About 10% of its global tyre output is produced in two Russian factories.