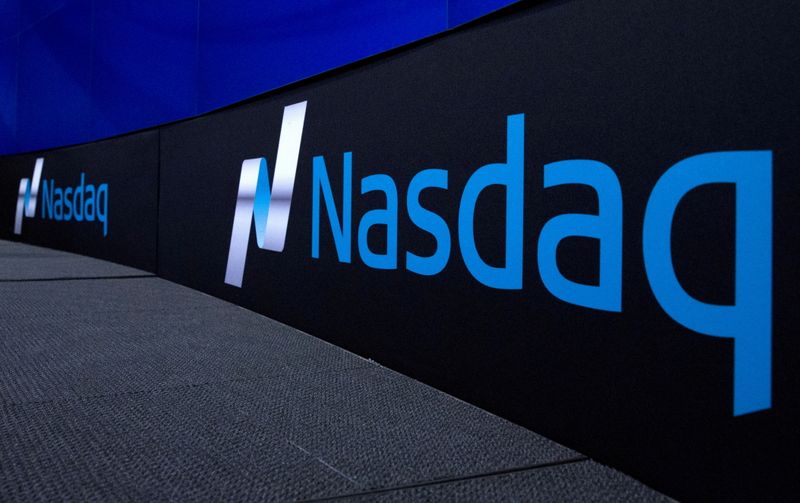 By David French and Ambar Warrick

(Reuters) – The Index closed above the 16,000 mark for the first time on Friday, in its second-straight record finish, while the Dow succumbed to its fourth losing session in the last five.

Both the Nasdaq and scored a winning week, after last week’s declines snapped a five-week run of higher finishes.

The ‘s second-successive weekly loss wiped out the last of its November gains, extending the index’s drop from a Nov. 8 record high.

Friday’s fall was caused by banking, energy and airline stocks slumping on fears of new lockdowns in Europe to curb a resurgence of COVID-19 cases.

Banking stocks fell, tracking a drop in Treasury yields as investors snapped up safe-haven bonds. [US/]Financials was among the worst-performing S&P sectors.

“It’s a normal time to take risk off. And in this case, there’s just so much liquidity that the market doesn’t go down – just people take risk off by going into safe havens,” said Jay Hatfield, chief executive of Infrastructure Capital Management in New York.

“Right now, COVID-19 is kind of a headline of the day. Every trade in the market right now is being driven by COVID.”

Tech stocks are sensitive to yields, as investors weigh future earnings in the sector against returns on debt.

FAANG stocks, which have largely persevered through economic shocks since 2020, traded broadly higher. Netflix Inc (NASDAQ:) gained along with other stay-at-home stocks.

The S&P 500 gyrated on Friday between positive and negative territory, after a week in which retailers pushed it to a record finish on Thursday.

The S&P consumer discretionary sector ended at a new closing peak for a second day in a row, having also broken its lifetime intraday high on Friday. This follows strong retail earnings this week and positive signs for holiday shopping.

Profit-taking in names which gained earlier in the week led to drops in Macy’s Inc (NYSE:), Kohls Corp and Gap Inc (NYSE:).

The information technology segment was the best performer on the S&P 500.

It was buoyed by Intuit Inc (NASDAQ:), which jumped as brokerages lifted their price targets on the income tax software company after it beat quarterly estimates and raised forecasts.