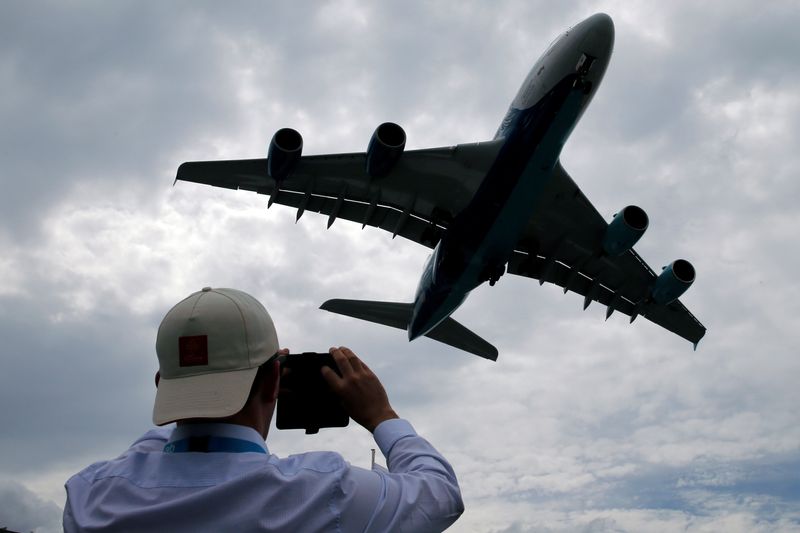 © Reuters. FILE PHOTO: A visitor takes a picture of an Airbus A380 as it lands after an air display at the 53rd International Paris Air Show at Le Bourget Airport near Paris, France June 23, 2019. REUTERS/Pascal Rossignol/File Photo

By Jamie Freed and Tim Hepher

DOHA (Reuters) – Two years ago, dozens of Airbus A380s set course for storage in sites from rural France to the Gulf as the outbreak of COVID-19 accelerated the demise of the world’s largest jets.

Now, the iconic European double-decker is gaining a new lease on life as airlines scramble to cope with rising demand and shortages of newer models, though for how long is unclear.

The return of the four-engine behemoth at carriers such as Singapore Airlines (OTC:SINGY) and Qantas Airways – and soon at Japan’s ANA Holdings and South Korea’s Asiana Airlines – comes despite high fuel prices that make operating new-generation two-engine widebodies far cheaper.

“Passengers, they love the plane and we have a lot of business class seats on it so it is a very good aircraft to fly on high-demand routes,” Korean Air Lines Chief Executive Walter Cho said on the sidelines of an airline industry gathering in Doha.

Korean Air plans to have three of its 10 A380s back in service by the end of the year, up from one today.

Strong demand and delays in deliveries of new Boeing (NYSE:BA) 777X airliners have also forced a rethink at Lufthansa.

It will decide soon whether to bring back the A380, but has only 14 pilots with current approval to fly them and will train A350 pilots to double up, Chief Executive Carsten Spohr said.

The A380 was once billed by Airbus as a 21st-century cruiseliner with prospects for 1,000 planes in service. But only 242 were built after many carriers opted for smaller twin-jets.

Analysts say the fleet will never return to pre-pandemic levels.

Yet 106 are back in service, according to data firm Cirium, up from a low of just four when the crisis hit in April 2020.

There is little second-hand demand for A380s, so airlines often face a choice of flying or scrapping them.

“Keeping aircraft that have been written down … may be the least worst option,” said Ascend by Cirium Global Head of Consultancy Rob Morris.

Even so, Air France permanently retired its A380s during the pandemic, Thai Airways and Malaysia Airlines have put them up for sale despite weak demand from buyers and even current operators have sent some to be scrapped.

‘YOU WILL REGRET IT’

The downturn prompted many airlines to write down the value of their biggest jets.

Having taken that hit, they can fly the jet without expensive depreciation charges – though the price of fuel devoured by the plane’s four engines remains a huge headache.

The A380 has also won a reprieve in part because airlines do not yet have enough demand to resume multiple flights on routes like Dubai-London, Singapore-Mumbai and Sydney-Los Angeles.

One airline boss left unsurprised by the partial comeback is Tim Clark, president of Emirates. It is by far the biggest customer after ordering a total of 123 jets for its Dubai hub.

Clark fought in vain to persuade Airbus to re-invest in the A380 before the planemaker decided in 2019 to end output.

“Everybody’s been struggling with capacity. I’ve watched it all; people saying that the trend is over,” he told reporters.

“If you want to do that you will regret it,” he recalled himself saying about the industry-wide shift to smaller jets. “And now what happens is you are having to reactivate A380s”.

Emirates’ superjumbo fleet has not been immune from the crisis, however, with dozens parked and currently out of use.

Qatar Airways Chief Executive Akbar Al Baker said the A380, which the airline has pulled out of retirement after a dispute with Airbus over newer A350s, remains uneconomic to fly.

Whatever its long-term future, the superjumbo is unlikely to fulfil its original vision as a luxury flagship, instead carving out a humbler role as a workhorse to cover busy periods.

“If you want to ramp up capacity you need to bring back the big bird,” said Subhas Menon, director general of the Association of Asia Pacific Airlines.

“They will need that or otherwise they will not be able to meet the expectations of the consumer.”

(This story refiles to add dropped word in paragraph one)

Kellogg to focus on snacks with surprise three-way split