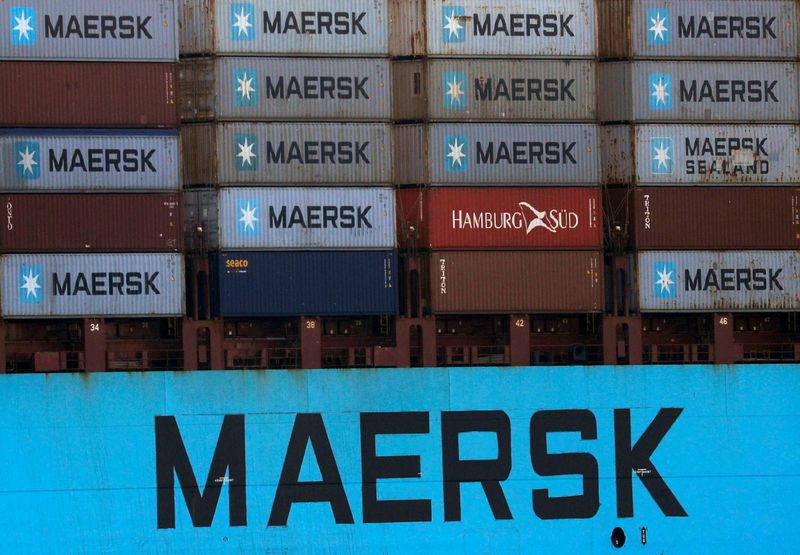 COPENHAGEN (Reuters) – The chaos that has bedevilled global supply chains in recent months will extend into next year, with a lack of truck drivers preventing hundreds of container vessels from offloading goods around the world, shipping group Maersk said.

Skou said the biggest problem preventing containers from leaving ports is a lack of labour, particularly drivers of heavy goods vehicles in the United States and Britain despite salaries having been raised “significantly”.

There are 300 container vessels laying idle outside ports, Skou said after Maersk reported robust third-quarter earnings on the back of record freight prices driven by the supply chain problems as the global economy recovers from the coronavirus crisis.

To meet the rising demand, Maersk said it has added more capacity but this could not offset the port congestion that sent third-quarter container volumes down 4% from the same period in pre-pandemic 2019 and slightly below the level in last year’s third quarter.

“A too large proportion of our capacity is tied up lying waiting outside the ports,” Skou said.

Maersk, which handles one in five containers shipped worldwide, said its main ocean business is now expected to grow more slowly than global container demand. The company now expects demand to grow by 7-9% this year, up from previous guidance of 6-8%.

Container demand growth is then expected to slow to 2-4% next year, it said, reflecting normalisation of the burgeoning consumer demand for material goods during the pandemic.

Maersk also announced that it is buying freight-forwarder Senator International along with two Boeing (NYSE:) aircraft to further the group’s diversification.

The group, which relies on ocean shipping for two thirds of its revenue, aims to expand its services to include more air and land-based freight, hoping to deliver door-to-door logistical solutions to clients such as Walmart (NYSE:) and Puma.

Strong financial results during the pandemic have accelerated the company’s ongoing transformation from a container shipping company to an integrated logistics company.

It said that final third-quarter earnings before interest, tax, depreciation and amortisation (EBITDA) tripled to $6.9 billion compared with a preliminary figure of close to $7 billion issued on Sept. 16 when the company also raised its 2021 forecasts.

Maersk also said it would extend its share buyback programme by an additional $5 billion over 2024 and 2025.

From Boeing to Mercedes, a U.S. worker rebellion swells over vaccine mandates