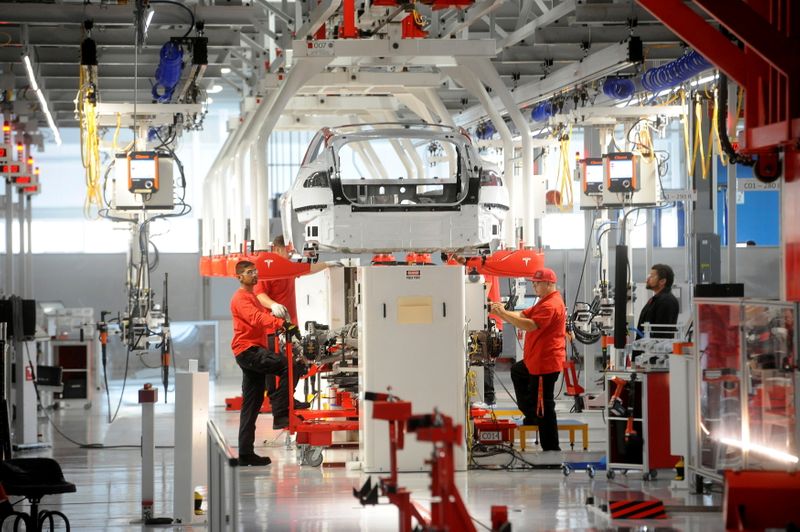 (Reuters) – Tesla (NASDAQ:) Inc subjects female workers to “nightmarish” conditions of rampant sexual harassment at its main factory, and supervisors turn their backs when complaints are brought, according to a new lawsuit.

Jessica Barraza, 38, said she has endured “near daily” catcalls and inappropriate touching in her three years at the electric vehicle maker’s factory in Fremont, California, where she works night shifts as a production associate.

The married mother of two said male workers would routinely proposition her, stare at her breasts, describe her as having an “onion booty” or “Coke bottle,” and brush up against her body while pretending it was accidental.

Barraza, a Modesto, California resident, said the final straw came on Sept. 28, when a man snuck up behind her and put his leg between her thighs as she clocked in from her lunch break.

“Oh, my bad,” he said, chuckling, after she jumped away, according to Thursday’s complaint in a California state court in Alameda County, outside San Francisco.

Barraza said Tesla’s human resources department has not addressed complaints she filed in September and October, and even disabled its mailto:hr@tesla.com email address for receiving complaints.

Tesla did not immediately respond on Friday to requests for comment. It closed its main press office in 2020. Barraza’s lawsuit was reported earlier by the Washington Post.

The automaker run by billionaire Elon Musk is not unfamiliar with claims of mistreatment at the Fremont factory.

A federal jury in San Francisco on Oct. 4 ordered Tesla to pay Owen Diaz, a Black former elevator operator, $136.9 million because he faced racial harassment there.

Tesla on Nov. 16 sought to overturn that verdict.

It said it “abhors and condemns” all racial slurs, and that even if it should have done better rooting out racism the most Diaz deserved was $600,000.

Barraza is seeking compensatory and punitive damages for violations of the California Fair Employment and Housing Act.

She also said that like many “tech employers,” Tesla requires many workers to sign arbitration agreements, keeping workplace disputes out of court, but that her agreement’s “unconscionable” terms make it unenforceable.

Barraza said she is on doctor-ordered medical leave, with a diagnosis of post-traumatic stress disorder.

Deutsche Bank board to discuss chair succession at weekend – source