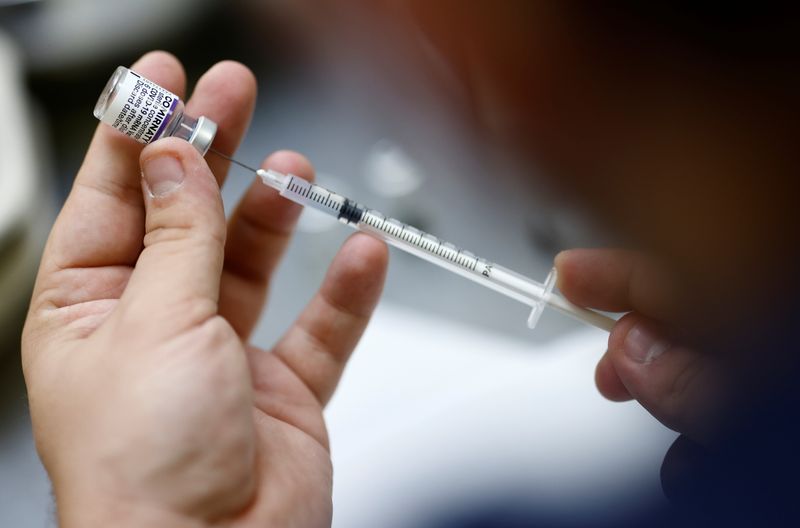 (Reuters) – The United States could begin administering Pfizer (NYSE:) and BioNTech’s COVID-19 vaccine to children ages 5 to 11 as soon as Wednesday after a panel of outside experts votes on Tuesday on how broadly the U.S. Centers for Disease Control and Prevention (CDC) should recommend its use in the age group.

The U.S. Food and Drug Administration granted emergency use authorization of the vaccine in the age group on Friday, but CDC Director Rochelle Walensky must make her recommendations before it can be rolled out.

While the vote from the CDC’s Advisory Committee on Immunization Practices (ACIP) will be considered by Walensky, she disregarded their advice last month, when she issued a broader recommendation for booster doses of the Pfizer COVID-19 vaccine than the panel had supported.

After the FDA authorization, the U.S. government and Pfizer began distributing the vaccine in preparation for a broad rollout for children, many of whom are back in school for in-person learning.

Zients said the United States has enough supply of the Pfizer/BioNTech vaccine for all 28 million children aged 5 to 11. While some children may be able to get their first shots as soon as Wednesday, Zients said the U.S. pediatric vaccine program will be running at full strength by next week.

The FDA authorized a 10-microgram dose of Pfizer’s vaccine in young children. The original shot given to those age 12 and older is 30 micrograms.

Advisers to the FDA last week said the lower dose could help mitigate some of the rare side effects. At their meeting, they paid close attention to the rate of a heart inflammation called myocarditis that has been linked to the vaccines from Pfizer/BioNTech and Moderna (NASDAQ:), primarily in young men.

The FDA has not yet authorized Moderna’s vaccine in teenagers as it works to understand the rate of myocarditis linked to that vaccine. Moderna said on Sunday it will delay seeking authorization of its vaccine in younger kids while the FDA completes its review for 12- to 17-year-olds that may take until January.

Myocarditis concerns will also be discussed during Tuesday’s ACIP meeting.

While the rate of severe illness from COVID-19 in children is much lower than in adults, it is still the eight highest killer of children in the age group in the United States this year, according to CDC data.

Only a few other countries, including China, Cuba and the United Arab Emirates, have so far cleared COVID-19 vaccines for children in this age group and younger.

In the United States, around 58% of the population is fully vaccinated, lagging other nations such as the UK and France.

The share of young children who receive the shots may be even lower. The U.S. vaccination rate for 12- to 15-year-olds trails other age groups at roughly 47%, and even some fully vaccinated parents may be reticent to inoculate their younger kids.

U.S. states with the highest adult COVID-19 vaccination rates are planning a big push to get children inoculated compared to states where hesitancy remains strong, potentially widening the gaps in protection nationwide, public health officials and experts have said.