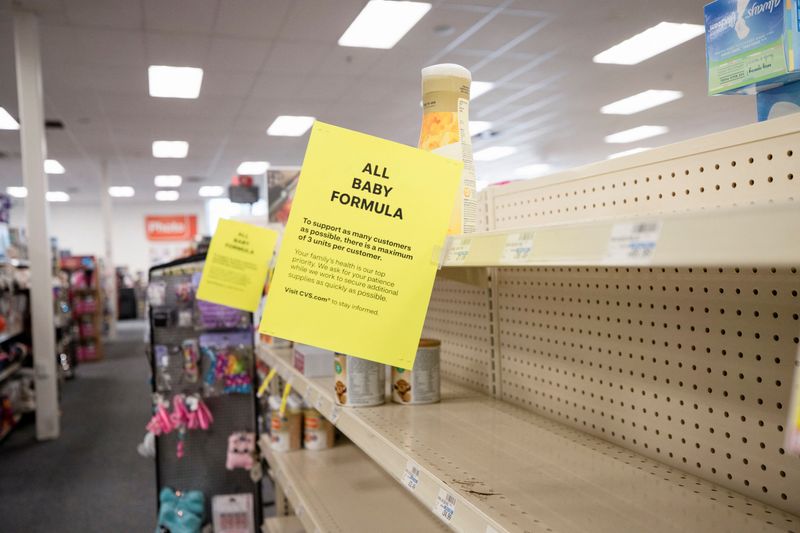 
WASHINGTON (Reuters) -The U.S. House Oversight Committee said on Friday it plans to investigate the four largest manufacturers of baby formula and seek answers on how to ramp up production amid a nationwide shortage.

“The infant formula shortage is a crisis for American families,” the committee said in a Twitter (NYSE:TWTR) post.

“The national formula shortage poses a threat to the health and economic security of infants and families in communities across the country – particularly those with less income who have historically experienced health inequities, including food insecurity,” the letter said.

The investigation, which will look at potential price gouging among other issues, is the latest move in Washington to address the shortage.

Abbott Laboratories (NYSE:ABT) in February recalled some baby formulas, including certain Similac products, made at the plant in Sturgis, Michigan, after complaints about bacterial infections in infants who had consumed the products.

Formula shortages have been compounded by supply chain snags and historic inflation, leaving about 40% of baby formula products out of stock nationwide, according to data firm Datasembly.

Less than half of babies born in the United States were exclusively breastfed through their first three months, the Centers for Disease Control and Prevention 2020 Breastfeeding Report Card showed.

U.S. President Joe Biden met on Thursday with executives from infant formula manufacturers and retailers, pressing them to do everything possible to get families access.

Some manufacturers have been ramping up production for weeks and officials also focusing on how to get formula on store shelves faster, said Brian Deese, director of the White House National Economic Council.

The White House on Friday will re-issue guidance it first gave states after the recall in February to be flexible in making it easier for those consumers to buy formula, Deese said.

The Food and Drug Administration will announce new steps in the coming days on importing certain infant formula products, the White House said on Thursday, and Biden has asked the Federal Trade Commission to probe reports of predatory conduct such as price gouging.

Deese would not speculate on how long the shortages might last.

“All of these steps together will make progress. It’s not going to solve itself in a day or week,” he said.

Two other House of Representatives committees have announced hearings on the shortage. 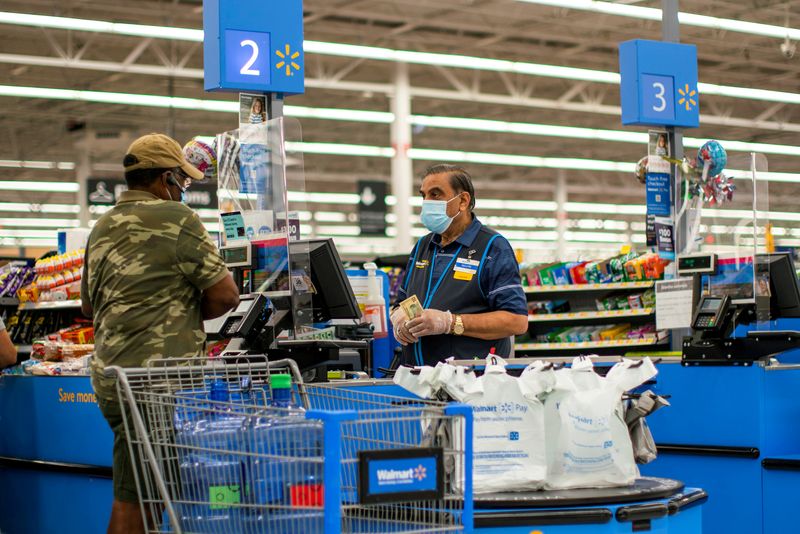 By Arriana McLymore and Aishwarya Venugopal

NEW YORK, NY (Reuters) – Walmart (NYSE:WMT) Inc is expected to show a steady rise in gross margins and revenue when it reports first-quarter results on Tuesday as price conscious shoppers, feeling the strain of persistent inflation, increase visits to the low-cost retailer.

Walmart has averaged a 4.9% increase in monthly visits since the start of 2022 compared to the same period in 2021, Placer.ai data showed, despite supply chain challenges and pricier fuel that have led shoppers to make fewer grocery store trips.

Analysts have also been upbeat about Walmart’s ability to diversify its revenue base through advertising and to keep prices low when compared with rivals that are struggling.

“What we found is pricing is still lowest at Walmart and they’ve done a very good job of keeping prices low to maintain and widen the price gaps with the competition and providing the best value for the consumer, even in an inflationary environment,” Telsey Advisory group analyst Joseph Feldman said.

Guggenheim analysts said Walmart is a “top pick” during inflationary times, in a note on Monday.

“We believe Walmart will continue to deliver impressive top- and bottom-line performance amidst the evolving pandemic environment regardless of tougher consumer spending patterns.”

Investors are already piling in. Walmart’s stock is up about 2% on the year to Friday, in contrast to the S&P 500‘s nearly 16% decline.

Walmart Chief Financial Officer Brett Biggs in March said that consumers were keeping their eyes on inflation and that rising fuel prices would cause consolidation in shopping trips.

The company has set its sights on growing its $12.99-a-month Walmart Plus membership to challenge Amazon (NASDAQ:AMZN)’s Prime, priced at $14.99 monthly. Walmart Plus, which launched in September 2020, offers delivery services and gas discounts but is still struggling to make ground against Amazon.

A recent report by eMarketer citing Bizrate showed that only 15% of U.S. adults used Walmart’s Plus service compared to 62% for Amazon’s Prime. 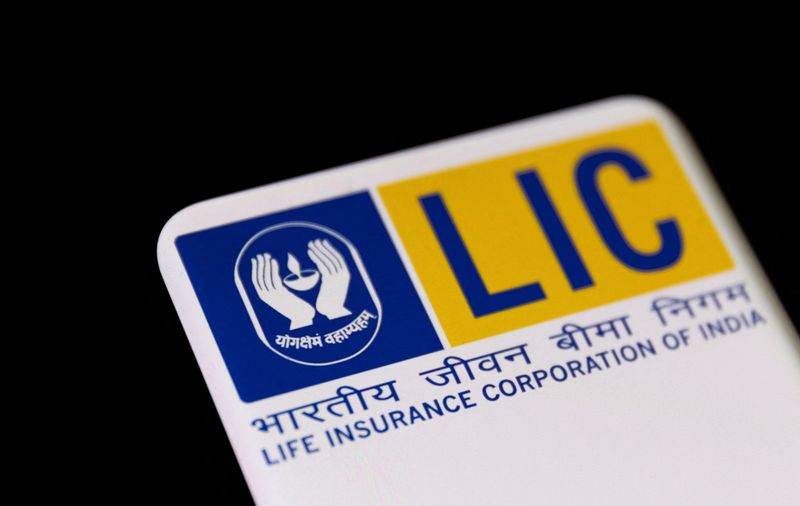 
By Nupur Anand and Chris Thomas

MUMBAI (Reuters) – Life Insurance Corp is likely to see a lacklustre debut when it lists on Indian stock exchanges on Tuesday despite the $2.7 billion initial public offering being oversubscribed, analysts said.

India priced LIC’s record-breaking IPO last week at 949 Indian rupees ($12.20), the top of the indicated range. The government has raised around $2.7 billion from selling a 3.5% stake in LIC, the country’s top insurer, which is state owned.

But volatility in global markets and selling pressure in the domestic stock market are likely to cast a shadow on LIC’s listing, with the shares likely to start trading near the IPO price or at a slight discount.

“Unofficial grey premium is trading down into negative territory mainly on the back of depressed global markets which are in the bearish zone … We expect a soft listing at +/- 5% of the offer price,” said Prashanth Tapse, research analyst at domestic brokerage Mehta Equities.

New Delhi had planned to list LIC in March this year but had to defer it as market conditions were not favourable in the wake of the Ukraine conflict.

The offering is seen as being important to India meeting its ambitious target for selling off state assets. The debut performance will also set the mood for forthcoming issues after retail investors were badly burnt by India’s recent large IPOs.

In the grey market, LIC shares were trading at a discount of nearly 15 rupees compared with a premium of nearly 100 rupees earlier this month.

“Even if the shares list flat on Tuesday, retail investors will still be able to make gains due to the discount that was offered so I don’t see it as a bad bet as valuations are also attractive,” Narendra Solanki, fundamental research head at domestic brokerage Anand Rathi.

The Indian IPO market, which saw dizzying growth in 2021, has had a significant slowdown this year. This shows the impact of geopolitical tensions, stock market volatility, a price correction in over-valued stocks from recent IPOs, plus concerns about rising commodity and energy prices, and slower economic growth, EY said in a report on Monday.

In the first quarter of 2022, proceeds raised through India’s primary markets were at $995 million via the three largest IPOs compared with $2.57 billion same period last year, EY said.

If market conditions improve there could be a robust pipeline of IPOs this year as more than 20 companies have filed draft prospectuses in first quarter of this year, Sandip Khetan, Partner and Financial Accounting Advisory Services Leader, EY India said. 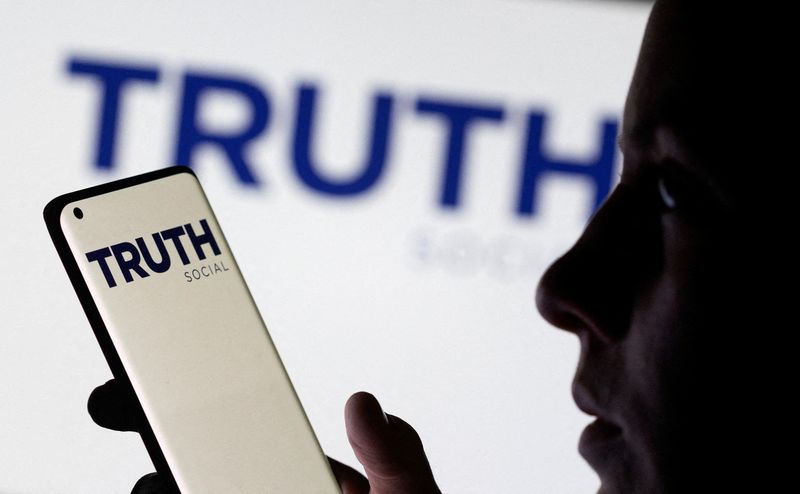 (Reuters) – Former U.S. President Donald Trump’s new social media venture disclosed in a regulatory filing on Monday it may raise up to $50 million through convertible notes before it merges with a blank-check acquisition firm.

Truth Media & Technology Group (TMTG) is set to receive $1.25 billion in funding once it merges with Digital World Acquisition Corp. But the deal, which was inked in October, has been under investigation by the U.S. Securities and Exchange Commission (SEC). The funds are inaccessible to Trump’s company until the SEC gives the green light and the transaction closes.

TMTG, which according to the filing posted an operating loss in 2021 of $4.3 million, had to secure other funding as a result. It raised $38.2 million as of March 31 through the issuance of convertible promissory notes, the filing shows.

The filing reveals that the maximum TMTG can raise though convertible notes is $50 million.

The rollout of Trump’s social media app, Truth Social, has been slow after it was launched earlier this year. Trump only started using the platform frequently this month. Two top executives left less than a year after they joined the company, Reuters previously reported.