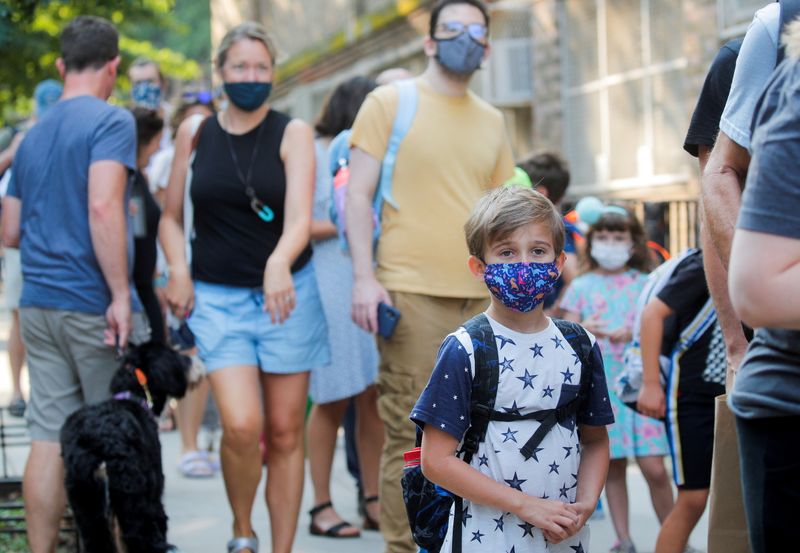 (Reuters) – U.S. states with the highest adult vaccination rates against COVID-19 are planning a big push to get children inoculated compared to states where hesitancy remains strong, potentially widening the gaps in protection nationwide, public health officials and experts said.

The U.S. Food and Drug Administration on Friday authorized the COVID-19 vaccine developed by Pfizer Inc (NYSE:) and BioNTech SE (NASDAQ:) for children aged 5 to 11 years old, paving the way for some 50 million doses to start being distributed to states. The Centers for Disease Control and Prevention is expected to give final clearance for the shot to be administered to this age group as soon as Tuesday.

From there, the path to inoculating children will vary greatly depending on their location, according to more than two dozen state officials surveyed by Reuters.

“We’re going to be left with a bifurcated situation like we have with the adults, where you have the northeast, West Coast, and some of the Upper Midwest vaccinated, and then the rest of the country partly vaccinated at best,” said Ira Loss, a senior healthcare analyst at Washington Analysis, a research firm.

California, New York and Washington, all led by Democratic governors who have promoted vaccination and mask-wearing during the pandemic, are setting up mobile sites and high-volume vaccination clinics for children and launching advertising and social media campaigns to promote pediatric vaccines, spokespeople for those states’ public health department said.

California has also mandated that school-age children get a COVID-19 vaccine once their age group is eligible, a measure being considered in New York and Washington.

On the contrary, Republican state governors have largely resisted measures such as mask mandates or vaccine requirements in workplaces, schools and public venues. More than a dozen states, including Florida and Texas, have made efforts to prevent businesses or schools in their state from imposing such requirements themselves.

Public health officials in some of those states, including Arkansas, Nebraska, Indiana, and South Carolina, told Reuters they plan to rely on local healthcare providers to make shots available to children.

“We plan to use the current vaccination infrastructure already in place for vaccinating children rather than have large scale events,” said a spokeswoman for Arkansas’ public health department.

Nebraska has not prepared an advertising campaign to promote children’s COVID-19 vaccination and it is leaving the task of administering shots primarily to local health departments and healthcare providers, a spokesperson told Reuters.

A spokesperson for South Carolina said that the supply shots in the state has consistently exceeded demand but it has “enough vaccine available to accommodate what we hope will be a heightened demand” for children’s vaccines.

While children becoming seriously ill or dying from COVID-19 is rare compared with adults, cases among unvaccinated people under 17 have increased in recent months due to the easily transmitted Delta variant of the coronavirus and now account for more than 25% of U.S. infections. Infected children can also pass COVID-19 to other people at higher risk of serious illness, including people who have already been vaccinated.

Some public health experts say the most effective way to ensure children get vaccinated is to make it mandatory for school attendance, but few states are considering such a move.

“We think that this is the best way to protect children from any of the consequences of the illness but also their relatives and their immune suppressed friends,” said Pamela Zeitlin, the chair of the department of pediatrics at National Jewish Health, hospital in Colorado.

But too many states “are hands off about this sort of thing,” she said.