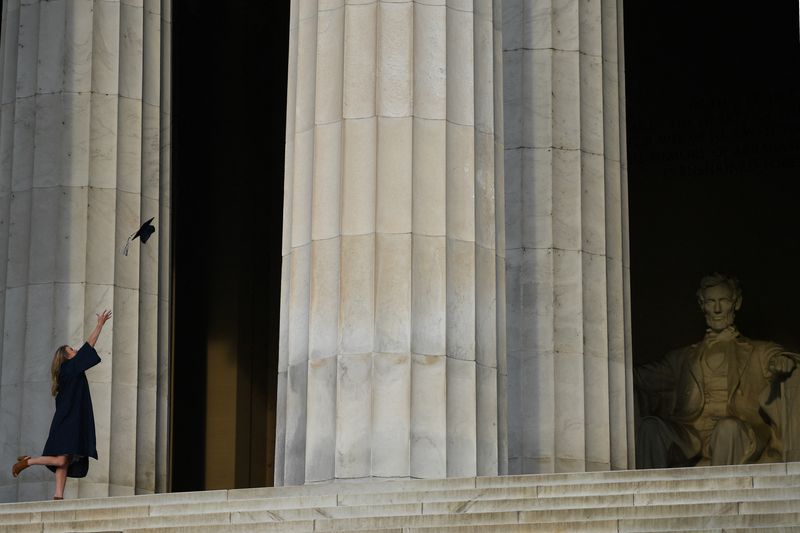 © Reuters. FILE PHOTO: A woman throws her graduation mortar board cap in the air as she poses for her photographer in front of the Lincoln Memorial in Washington, D.C., U.S. April 30, 2019. REUTERS/Clodagh Kilcoyne/File Photo

(Reuters) – One by one, over the last week of May, Twitter Inc (NYSE:TWTR) rang up some members of its incoming class of new hires who had recently graduated from college and revoked the job offers in 15-minute calls, according to some of the recipients.

“It was traumatic,” Iris Guo, an incoming associate product manager living in Toronto, told Reuters. She received the bad news in a 10:45 p.m. video call that her position had been eliminated. Since then, she has raced to find new employment in order to secure her U.S. work visa.

More than 21,500 tech workers in the United States have lost their jobs so far this year, according to Layoffs.fyi, a website that monitors job cuts. The number of tech layoffs in May alone skyrocketed 780% over the first four months of the year combined, according to outplacement services firm Challenger, Gray & Christmas.

But recent college graduates like Guo, who graduated from the University of Waterloo and studied financial management and computer science, represent a new dimension to the cutbacks as their nascent careers are eliminated even before they begin. The trend reflects a new austerity sweeping across some parts of the tech industry such as crypto and venture capital-backed companies.

For crypto firms, the belt-tightening is due to the recent crash in cryptocurrency prices and venture capital-backed companies are also cutting costs to avoid going back to the market for additional funding, said Kyle Stanford, senior analyst for venture capital at Pitchbook.

In what appears to be a counter trend to the Great Resignation of 2022, when legions quit for new jobs, some tech job-seekers now face cost cuts and hiring freezes amid four-decade-high inflation, a war raging in Ukraine and the ongoing pandemic.

In the case of those who were poised to join Twitter, the whims of billionaire Elon Musk have also caused stress. Musk has agreed to buy Twitter for $44 billion, but his recent tweets have raised questions about when and if the acquisition will be completed.

To be sure, hiring in the tech sector as a whole has remained strong, according to experts from staffing and consulting firms. Tech roles in the healthcare and finance industries are strong, as well as in the information technology field, said Thomas Vick, a Texas-based regional director for staffing firm Robert Half’s tech practice.

But for the incoming class of new hires out of college, losing their job offers now is especially damaging as they said they are locked out of companies like Meta Platforms, Alphabet (NASDAQ:GOOGL) Inc’s Google and other tech giants, which have already secured their new cohort of recruits.

Lucas Durrant, an electrical engineering graduate from Canada, was set to start his new job as a software engineer at Bolt last week. While on vacation a few weeks ago, he received an email stating that his offer was rescinded. Bolt announced it would begin layoffs in late May, citing economic conditions.

“It feels a bit like a race against the clock before we see a bigger economic downturn,” said Durrant. “Pretty soon, I’m also going to be competing against people graduating in 2023.”

At least 40 recent college graduates have lost job offers in the past few weeks, according to LinkedIn posts and Google spreadsheets that circulated online to help those affected find new positions.

In a statement, Twitter said it acknowledged that the rescinded offers could put candidates in a difficult position, and said it is offering compensation to those affected.

Coinbase pointed to a June 2 blog post that said the decision to rescind a number of offers was not made lightly, but was “necessary to ensure we are only growing in the highest-priority areas.”

Chloe Ho, a recent graduate from the University of California, Davis, and who is originally from Hong Kong, has until Sept. 29 to find a new job, or be forced to leave the United States. Ho had accepted a position as a content marketing specialist for an online grocery company called Weee! before the position was rescinded.

As a non-U.S. citizen who needs a new employer to sponsor her work visa, “my options are very limited,” she said.

Ho said she canceled a lease for a new apartment in the San Francisco Bay area, pulled out of vacation plans with friends and will now spend the next three months networking for a new job during the day and submitting applications at night. “I had planned everything around this job,” she said.

Many affected graduates took to LinkedIn to express their disappointment, detail how the rescinded offers upended plans for cross-country moves and ask for referrals to new companies.

Graduates who spoke with Reuters said they were surprised by the level of outreach from people offering to help. Still, the sting of losing their dream jobs has lingered.

One recent college graduate who was set to join Coinbase, and did not want to be named due to his ongoing job hunt, said that just a week before losing his job offer, he had received an email from Coinbase with reassurance that the company did not plan to walk back existing offers.

“I was disappointed for a few reasons. I didn’t think leadership would make that decision,” he said.

While the companies may be saving some money in the short term, they are risking “potentially catastrophic” reputational damage, said Brian Kropp, distinguished vice president of Gartner (NYSE:IT)’s human resources practice.

“Just think about how unfair that is to people you’re rescinding the offer from,” he said. “You’re putting them in a painful situation.”