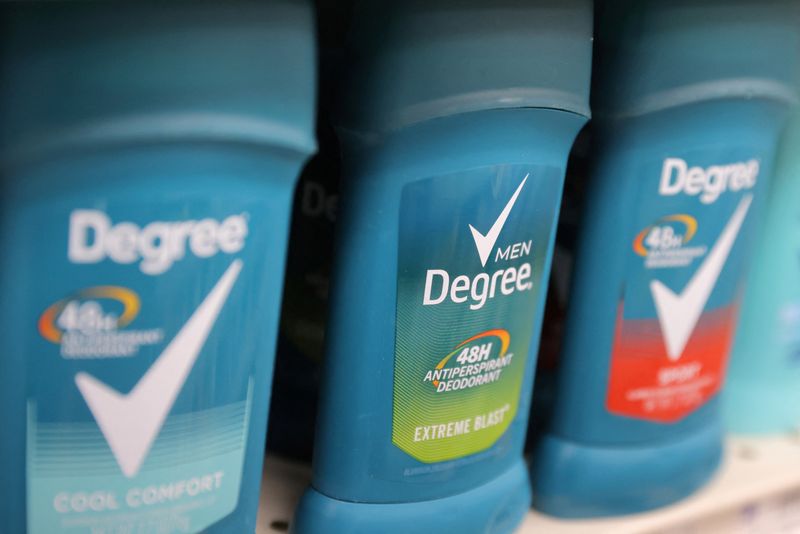 LONDON (Reuters) – As commodities – from crude oil to sunflower oil – remain in short supply, Britain’s Unilever (NYSE:UL) has changed the ingredient makeup for some of its products like deodorants and packaged food to cut costs and mitigate supply constraints.

In April, Unilever boss Alan Jope said the company had begun altering some of its recipes so it could use rapeseeed oil instead of sunflower oil, which had become scarce since the invasion. Ukraine typically produces about half the world’s exports of sunflower oil.

According to Unilever’s head of research and development, Richard Slater, the maker of Dove soap and Knorr stock cubes is not stopping there.

“Globally, there was a shortage of silicon so we were looking at our deodorant and making sure that we looked at the formulations there…to use less ingredients that are under pressure,” Slater said in an interview.

In its home and beauty care businesses, the company has also been trying to reduce its products’ reliance on petrochemicals and make them more sustainable.

“That has a double benefit if you can get a better product that is more sustainable, but also reduce the pressure on some of those ingredients under cost pressure,” Slater said.

Many packaged goods makers have tried to wean themselves off palm oil, which has been blamed for deforestation and labor abuses, but is used in everything from P&G’s Tide pods to Ferrero’s Nutella.

On Thursday, Unilever said it had tied up with San Diego-based Genomatica to build and commercialize alternatives to palm oil and fossil fuel-derived cleansing ingredients.

“We’re not talking about a few thousand tonnes here, we are talking meaningful commercial scale,” Slater said, declining to provide details about how much of the new ingredient it plans to produce in the near term.

Sourcing alternatives to palm is also “really important from a supply resilience point of view” due to the pricing around the commodity, Slater added.

Unilever no longer relies solely on manual testing when it changes its formulas. Instead, it digitally models how new ingredients would affect products, Slater said.

For instance, he added, as it alters recipes for shampoos, the company uses robots to try dozens of differently modeled potential products on hair in a matter of hours.