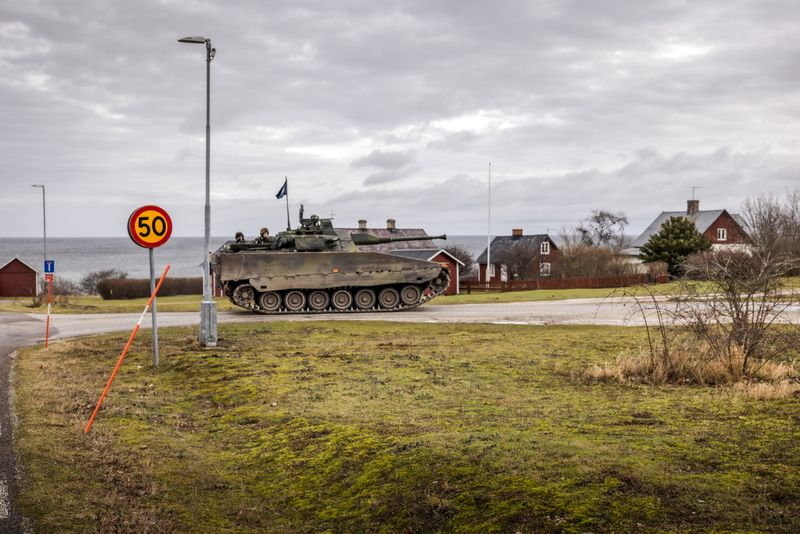 © Reuters. Gotland’s Regiment patrols the roads in a tank, amid increased tensions between NATO and Russia over Ukraine, on the Swedish island of Gotland, Sweden January 16, 2022. TT News Agency/Karl Melander via REUTERS


By Philip O’Connor and Ilze Filks

VISBY, Sweden (Reuters) – The crack of gunshots splits the silence in a sleepy forest as Camilla Selander, a deli-counter worker, squeezes off shots from her Glock 9 millimetre pistol during target practice with Sweden’s Home Guard on the island of Gotland.

The 34-year-old is one of the volunteers practising at a military firing range on the island, likely to be on the front line of any future confrontation between Russia and Sweden.

The island lies just 300 km (186 miles) from the home of Russia’s Baltic Fleet in the Russian exclave of Kaliningrad, sandwiched between Lithuania and Poland.

“People are a bit worried, but we’re trying to keep everybody calm, so that we talk about what is happening but nevertheless tell each other that it’s going to be fine,” Selander told Reuters in a break during shooting in the forest of Visborgsslatt.

Russia’s invasion of Ukraine has forced Sweden and neighbouring Finland to rethink security policy and whether they can remain safe outside NATO, unprotected by its promise that an attack on any member will be seen as an attack on all.

Both countries are expected to decide whether to apply for membership in the 30-nation alliance in May.

Gotland, briefly occupied by Russian troops in 1808 during a war that saw Finland for a century fall under the sway of the Tsar, is seen as important to the defence of Sweden and NATO’s vulnerable Baltic members Latvia, Lithuania and Estonia.

“If the Russians were to occupy parts of Sweden that would create some kind of … ‘wall’ that NATO would have to fight its way through before being able to help its Baltic members,” said Karlis Neretnieks, a former major general and head of Sweden’s National Defence College.

“With Sweden in NATO this ‘wall’ would more or less become a ‘road’ to help the Baltic states instead.”

After withdrawing its forces from Gotland following the collapse of the Soviet Union three decades ago, Sweden is hastily rebuilding its military presence on the island, a 170 km (105 mile)-long rocky outcrop in the middle of the Baltic Sea that is a popular vacation spot for many Swedes.

In 2018, it reactivated the army’s Gotland Regiment and it has reinforced the island’s defence with ground-to-air missiles and other measures. The build-up is part of a general rearmament sparked by Russia’s annexation of Crimea in 2014.

Sweden’s military and government have said they do not believe Russia has plans to invade.

But President Vladimir Putin’s actions in Ukraine mean few are willing to rely on that assumption for their security and both Sweden and Finland are widely expected to announce they plan to apply for NATO membership.

“In the short term, the military situation would be better for Sweden and for Gotland,” Colonel Magnus Frykvall of the Gotland Regiment said.

“The threshold effect would be higher for Russia in terms of attacking a NATO country than a country that is not in NATO.”

A decision to join would redraw the security map of Northern Europe, creating a largely unbroken band of NATO states across the continent from the Arctic to the Black Sea.

Finland’s President Sauli Niinisto is expected to give his support on May 12, pressuring Sweden to follow suit.

An all-party review of Sweden’s security policy will report on May 13 and the ruling Social Democrats – long opposed to joining the alliance – are expected to come out in favour of membership days later.

For the people of Gotland, whose scenic coastline is dotted with disused machine gun nests from World War Two, recent months have brought a sense of a return to a bygone era, when its strategic importance on a Cold War frontier was never doubted.

“Gotland,” said retired officer Rutger Banholtz, a former head of the Home Guard. “It is an aircraft carrier.”

“He who sits in Gotland controls large parts of the Baltic Sea.”

Philippines election winner Marcos tells world to judge him by actions, not family’s past 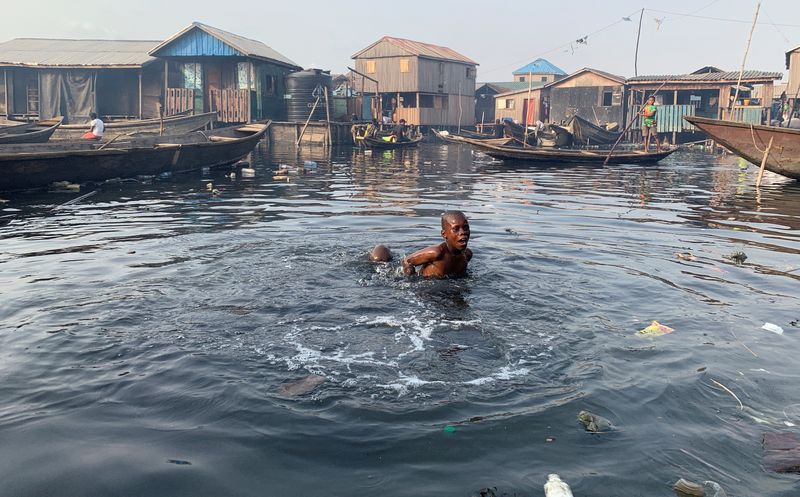 (Reuters) -A Michigan judge on Tuesday granted a temporary injunction to block the enforcement of a state abortion ban, which might have taken effect if the U.S. Supreme Court overturns the Roe v. Wade precedent that legalized abortion nationwide.

A Michigan Court of Claims judge in Lansing sided with women’s healthcare provider Planned Parenthood in its lawsuit against the state seeking to stop the potential enforcement of the ban, which was enacted in 1931 and rendered unconstitutional in 1973.

The U.S. Supreme Court appears ready to overhaul the constitutional right to abortion. On May 2, the news outlet Politico published a leaked draft opinion by Justice Samuel Alito, which showed the court’s conservative majority intended to overturn the 1973 Roe v. Wade ruling that established the right to abortion nationally. The court’s final decision is expected in June.

Nine states, including Michigan, have abortion bans on the books that were enacted before the Roe v. Wade ruling, and which could potentially be enforced anew if Roe is overturned.

“Forced pregnancy, and the concomitant compulsion to endure the medical and psychological risks accompanying it, contravene the right to make autonomous medical decisions,” Court of Claims Judge Elizabeth Gleicher wrote in her opinion.

Michigan’s 1931 law criminalizes all abortions except in cases to save the pregnant woman’s life.

“Today’s ruling means all Michiganders will continue to be able to access the health care they deserve and to be able to decide for themselves their own futures,” Sarah Wallett, chief medical officer of Planned Parenthood of Michigan, said in a statement.

Whitmer praised the judge’s decision on Tuesday, and said in a statement that the injunction “will help ensure that Michigan remains a place where women have freedom and control over their own bodies.”

Whitmer added that she is still pressing the state Supreme Court to recognize the right to abortion under the state constitution to further protect abortion access, a campaign she began last month.

A representative for Right to Life of Michigan, an anti-abortion group, called the judge’s ruling “egregious for many reasons” in a statement on Tuesday. John Bursch, senior counsel for Alliance Defending Freedom, said the judge had no jurisdiction to rule in the case as the defendant – state Attorney General Dana Nessel, a Democrat – was not defending the pre-Roe law.

“Government officials have a duty to uphold the law and protect their citizens, including unborn children” Bursch said, adding that Right to Life of Michigan was considering next steps.